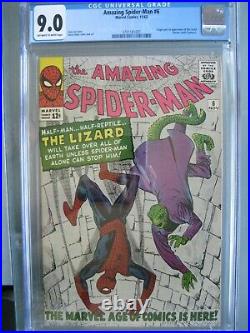 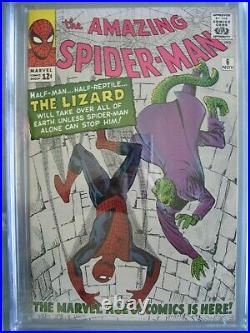 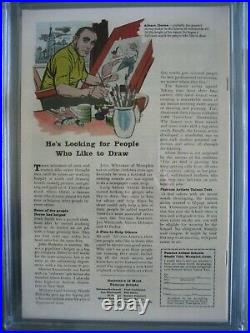 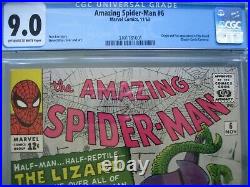 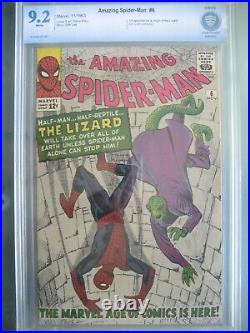 Issue from 1963 introduces Dr. Curt Connors and his alter ego, the Lizard. The Lizard has been a super-villain mainstay within the Spider-Man comic book universe for many decades and was the primary villain in the 2012 film. Doctor Connors also appeared in a number of other Spider-Man films. The offered example is an impressive one, certified at the CGC Near Mint 9.0 tier.

Hard to find in high grade. (Freshly graded in new case). In the summer of 1962, Stan Lee and Steve Ditko would conceive of and create Spider-Man, a character that would surpass all expectations and prove to be an iconic brand on his own.

Casual readers quickly became devoted to a wall-crawling wonder that was just as appealing for his sarcastic sense of humor and wit as he was for his super powers. Peter Parker would find it both a blessing and a curse to be bitten by a radioactive spider, as he would be endowed with amazing strength and agility, an uncanny sense of awareness when danger was near, the ability to stick to walls and climb almost any surface, and feeling a heavy sense of responsibility. Nearly 60 years later, Spider-Man is a household name in the United States, and the popularity of the character has spread around the world. Spidey's outstanding cinema success has already led to six films that grossed billions of dollars globally, not to mention countless successful merchandising efforts.

When reports of a humanoid-lizard (naturally dubbed "The Lizard") come out of Florida, Daily Bugle publisher J. Jonah Jameson issues a challenge to Spider-Man: Defeat the Lizard. Hearing about this, Peter goes to see what Jameson's intentions are. He learns that Jameson only issued the challenge to sell more papers. Later, while at the Natural History Museum with his classmates, Peter takes an express interest in the lizard exhibits. When crooks try to rob the museum and take Liz Allan, hostage, Peter slips away and changes into Spider-Man and comes to her rescue. Hearing another report of an attack by the Lizard in Florida, Peter decides to take Jameson's challenge. As Spider-Man, Peter pays Jameson a visit to take him up on his challenge, in the hopes that he'd send Peter Parker to Florida to take pictures of the event. The plot works, however, it backfires ever so slightly: Jameson himself is going to accompany the boy in order to supervise him. As Spider-Man, Peter checks out his only lead: Curtis Connors, a resident expert on lizards. However, when he arrives at the Connors home, Spider-Man learns from Curt's wife that her husband is the Lizard: He was trying to find a way to allow humans to grow back limbs. Since Connors had lost his arm in the war, he used himself as a guinea pig on the project. While his arm grew back, the side effects of the serum he created caused him to transform into the Lizard. The Lizard then attacks the Connors home, and Spider-Man defends them.

He then works in Connors' lab to create an antidote for the serum, in the hopes that it can change Connors back to normal. Going into the swamp to find the Lizard, he finds him and his army of obedient reptiles in an old castle. Setting up his camera to take pictures, Spider-Man battles the Lizard and eventually slips him the antidote which changes the Lizard back into his human form.

Connors thanks Spider-Man for his help, and they all decide to keep mum about the fact that Connors was the Lizard, as he had no control over what he did while in that form. Returning to a furious Jameson as Peter Parker, when Peter offers him the pictures (Which he said he bought off a local) Jameson dismisses them as fakes and tears them up. He then tells Parker that this dud of a trip is coming out of his future pay. Returning back to New York, Peter tries his luck getting a date with Liz Allan, which ends with her hanging up on him because she is expecting a call from that dreamy Spider-Man. As a round-up to his adventure to Florida, Peter sends Jameson a mocking letter to the Bugle.

Don't make me laugh! If there really is a giant lizard down south, Spider-Man will never tackle him! He'd rather stay here, fighting two-bit hoods and making a rep for himself! The item "Amazing Spider-Man #6 CGC 9.0 (was CBCS 9.2 WP) 1963 Origin & 1st app the Lizard" is in sale since Thursday, February 25, 2021.

This item is in the category "Collectibles\Comics\Silver Age (1956-69)\Superhero\Spider-Man". The seller is "madeofmiracles925" and is located in Dublin, California. This item can be shipped worldwide.